When the New Zealand government announced that it would no longer grant exploration permits for offshore oil and gas projects, the Taranaki region on the North Island started planning for a Just Transition beyond fossil fuels.

The Taranaki region on New Zealand’s North Island is home to 2.5 per cent of the country’s population and has the second-highest regional income per capita in New Zealand. Alongside a very profitable dairy farming industry, 28 per cent of this regional economic output comes from the energy sector, fuelled by its rich on-and offshore hydrocarbon resources. In order to fulfil its Paris Agreement commitments, however, in 2018 the New Zealand government announced that no further offshore hydrocarbon exploration permits would be granted. This announcement has a huge impact for the future economy of Taranaki, and prompted a dramatic response from stakeholders and policy makers in the area.

In 2019 Venture Taranaki, the region’s development agency, decided to confront the shift to a low-emissions economy proactively rather than wait for the impacts to be felt. They engaged a Lead Group of relevant organisations, as well as communities, iwi (First Nations representatives), local and central government, businesses, educators, unions and workers to create a new 2050 Roadmap for Taranaki. E tū, the largest private-sector union in New Zealand, one of the Lead Group organisations involved in the process, championed the use of the roadmap to pursue a Just Transition – that is, a transition that is fair, equitable and inclusive, where workers don’t bear the brunt of structural adjustment to the world’s economy.

In total, more than 700 people took part in 23 workshops in the initial drafting stages of the roadmap, with over 1,000 people providing further input on the draft document before the final version was published in July 2019.

One of the key successes of the discussion process, according to Jen Natoli of E tū, was to engage a wide audience, and to do so quickly. Jen explained that to do this, they created a “direct line of sight for people in our industry” by linking the government’s announcement directly to impacts on industries that rely on oil and gas, such as manufacturing and engineering. Within a month of the announcement, E tū held a union meeting fronted by Prime Minister Jacinda Ardern, which built awareness and encouraged stakeholders that might otherwise have ignored unions to reach out and engage. Jen says they also “built relationships with stakeholders quite early, including local government, community and environmental activist groups, vocational education, iwi and hapū groups”. In particular, engaging groups that had been disaffected by the status quo was something E tū took very seriously.

Jen explained the workshops were designed to embrace and discuss divergent views about “what Taranaki would look like in 2050 if we had a blank slate”, as well as brainstorming ideas about how to get there in a just way. Language and communication were the key here; linking big ideas to personal experiences was helpful. For example, “tying the concept of a Just Transition not just to climate change but to all disruptions and to the future of work and automation” helped people to understand the concept.

“The confidence that workers and delegates displayed in meetings with big players such as company CEOs was one of the greatest rewards of the process.”

In discussing what the future might look like, they found that more engagement came from asking "what does justice look like for our region – for your kids and their kids into the future?" than "what does justice mean to you?" She says, “That’s when we got more creative ideas from our members and our delegates.” For Jen, the confidence that workers and delegates displayed in meetings with big players such as company CEOs was one of the greatest rewards of the process. Enabling real and positive communication between diverse stakeholders is key to real community ownership and investment in regional plans such as this.

A roadmap created together goes further

The final roadmap created from these discussions is publicly available online, along with twelve “Transition Pathway Action Plans”, which have been devised and published based on the goals outlined in the roadmap. These action plans outline specific targets as well as opportunities for businesses, workers and communities in transitioning to a low-carbon economy. The next stage is to secure additional public and private funding for the region to move forward with these action plans.

The new roadmap is also being integrated with Taranaki’s current economic development plan, so community voices will continue to play a large part in all aspects of future development. Speaking with us in October 2020, Jen Natoli said that this success “proves the theory of what justice looks like in a Just Transition” and will allow Taranaki to “not see a spiral down but instead spiral towards a more positive economic future”, as long as the ideas and plans are funded in the near future. There are certainly many parallels to the situation in the Latrobe Valley, for which Taranaki’s engagement success provides true inspiration. 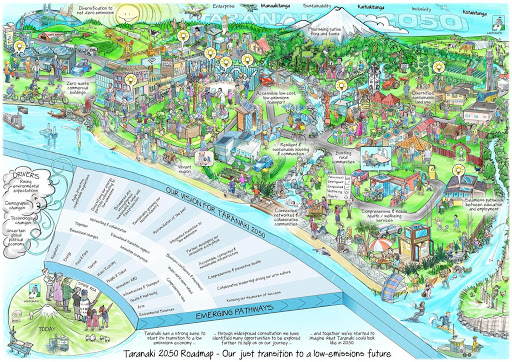 For more information go to:

When the New Zealand government announced that it would no longer grant exploration permits for offshore oil and gas projects, the Taranaki region on the North Island started planning for a Just Transition beyond fossil fuels.
Taranaki 2050
About